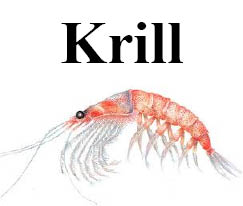 Omega-3 fatty acid is very important to the body not only for growth and development of many cells and organs of the body but also for the maintenance of health and improvement of bodily functioning. One of the greatest sources of this essential fatty acid is krill.

Krill is a shrimp - like crustacean which belongs to the group of Euphausiacea. Krill is a small invertebrate, approximately 1 to 7 inches in length, which inhabits in all oceans of the world. The name krill is a Norwegian word which means “young fry of fish”. In the world of marine animals, krill plays an important role by allowing connection of the food chain. Krill consumes phytoplankton and zooplankton which are plant – like microorganisms at the base of the marine food chain.

These microorganisms consume carbon dioxide and release oxygen. Krill makes up the biggest part of the diet among many larger animals such as whales, seals, penguins, squids and other fishes. In a day - to - day basis, krill migrate in a vertical manner thereby providing food for predators situated at sea surface at night and those inhabiting the abyss during the day. The reproduction and growth of krill is also amazing that it can equally replace the population which is lost.

Krill oil is rich in Omega–3 fatty acid. In fact, krill oil is becoming more and more popular as a nutritional supplement of essential fatty acids especially Omega – 3. These supplements are made available in the form of gel capsules or liquid extract which can be purchased in many health and food stores or Online. Many individuals claim that krill oil is better than fish oil since it does not cause unusual burps or fishy aftertaste like fish oil. And most importantly, krill oil contains sufficient amount of fatty acids and at the same time has a high concentration of antioxidants specifically Astaxanthin.

Fish oil contains fewer amounts of antioxidants. These antioxidants are also considered to be weak. Studies reveal that if you are increasing your supply of Omega - 3 fatty acids through fish oil or krill oil supplements; can increase DHA a healthy component of the brain.

Krill oil also contains a powerful antioxidant known as Astaxanthin. This is from the algae that cover a larger portion of krill’s diet. This kind of algae is the one that provides krill and other crustaceans their reddish to pink in color. Antioxidants in the body are important because these chemicals help the body neutralize free radicals and other harmful substances thus protecting the body from damage. Free radicals must be eliminated because these can also tamper DNA replication during cellular division. An edge of this antioxidant is that it can cross the blood – brain barrier thus providing adequate protection to the eyes and the parts of the central nervous system.

Like many other supplements, Krill oil should be used with caution to be safe. It is also important that you should consult your physician and discuss your plans of krill oil supplementation. Allergic reaction is common because there are many people who are hypersensitive to sea foods.