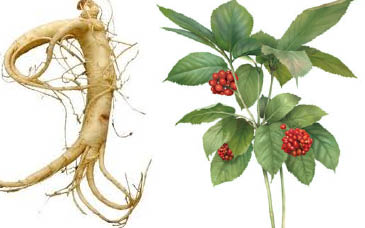 Ginseng is a slow - growing perennial plant in which its roots are fleshy which are commonly used as dietary supplement and beverage. This plant is a member of the genus known as Panax of the family of Araliaceae. It grows abundantly in the eastern part of Asia where the climate is cool specifically in Korea, northern China and east region of Siberia. There are many species of ginseng in which they are named according to where they are discovered. What is common among these ginseng species is its property as an adaptogen.

Ginseng is an herb which is considered as an adaptogen. This classification of chemicals improves the body’s resistance to physical exhaustion and external stress. In fact, for almost twenty centuries, Ginseng has been commonly used as a natural dietary supplement to boost vitality and endurance. The mechanism is that cellular energy is produced in the cell’s powerhouse called mitochondria which turn nutrients into usable energy called Adenosine Triphosphate (ATP) and Creatine Phosphate (CP). However, when we are under stressful situations, the body produces hormones which can alter the ability of the mitochondria to produce ATP and CP. Thus, energy levels are also reduced. Eventually, adaptogenic substances plays a critical role in improving the cell’s production of ATP and CP by allowing the body to deliver more oxygen to cells while greatly reducing oxidative damage affecting the mitochondria of the cells.

Not to mention, ginseng also has ginsenosides which are considered to effectively control the release of stress hormones such us cortisol and noradrenalin, thus, preventing chronic stress which can greatly affect one’s energy level. Studies show that ginseng also relaxes the blood vessels thereby improving circulation and delivery of oxygen to the cells of the body. Clinical research reveals that ginseng has the high potential to improve performance of athletes. It can boost stamina.

Other benefits of Ginseng are that it can serve as a nourishing stimulant to improve depression and as adjunct treatment for Diabetes Mellitus Type II. It can also be employed as a support agent for the improvement of sexual dysfunction among men.

The fleshy root of Ginseng is available in the market in dried form which may be whole, sliced, minced or semi – granule form. These ginseng products are often found in many energy drinks, teas, health drinks, food additives and energy – boosting supplements. Other commercial products which contain ginseng are also common such as shampoos, conditioners, skin moisturizers, soaps and even cosmetic items. This is for the reason that ginseng can effectively delay the ageing process and improve the health of the cells and tissues. Ginseng also has the ability to enhance memory, reduce mental fatigue and improve the health of the immune system. To note, ginseng combined with Gingko biloba can considerably stimulate memory among middle – aged individuals.

Ginseng is generally safe to use for any ages. In fact, this herb is widely used as day – to – day beverage among many people in Asia especially in Korea. However, if you are planning to undergo supplementation, it would be best that you should seek medical advice first.